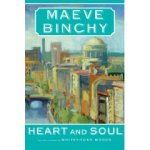 I love Maeve Binchy books-they are cozy, have happy endings, lots of interconnected stories, and all around charming.  Not to say that everyone and everything in them is happy and light-there are plenty of misunderstandings, broken hearts, nasty people, and more.  I think she writes good all around stories.  And she is 100% responsible for my belief that Ireland is a quaint and old-fashioned and naive place. [I know people from Ireland and they do not appear to have stepped out of a Binchy novel, but I persist in this belief.  We are hoping to travel there in a couple of years and I’m certain I am in for a rude awakening.]

I was absolutely delighted to discover that not only were there some connections and references to previous novels Quentins, Nights of Rain and Stars, and Whitethorn Woods, but one of the main characters turned out to be one of the main characters from Nights of Rain and Stars.  It was very satisfying to find out how Fiona’s life turned out back in Ireland apart from loser Shane.  The premise of the novel is that a new cardiac care clinic (or, as they seetly call it, “the heart clinic”) has been established.  The director, Clara Casey, the young doctor Declan, nurses Barabara and Fiona, general office girl Ania, and many others work hard to make the clinic a success in its first year.  Everyone’s lives become intertwined, including patients, and there are several romances in the works. It’s all very satisfying.  One thing I did not like was a plot point at the end that has a bride wanting to back out of her wedding.  Her reasoning was simply so stupid that I can’t even believe I was meant to believe that a heretofore intelligent young woman would have concocted such a thought. One of the other subplots was also just flat out weird–a young woman going kind of cuckoo and setting up a priest so it would look like he was having an affair with her.  But it was all good entertainment and really a must read for anyone who read Nights of Rain and Stars.

2 thoughts on “Heart and Soul by Maeve Binchy”